According to George Buday, in The History of the Christmas Card (1954),

“It may be argued that since Christmas cards are ephemeral their curriculum and interest is necessarily a slight one.  Nowadays the lifetime of the Christmas card is that short period of conspicuous display from its arrival just before Christmas to Twelfth Night, when, according to tradition, all Christmas cards and other festive decorations are cleared away.” (p. 1-2)

Despite this often wide-spread opinion, Christmas cards hold special memories and sentiments for the sender and receiver, and can be information-filled archival documents.

For the holiday season this year, relax and take a trip through some of the Christmas cards in the Port Hope Archives collection!

“A Merry Christmas, uncle” cried a cheerful voice.  It was the voice of Scrooge’s nephew, who came upon him so quickly that this was the first intimation he had of his approach.

Charles Dickens’ A Christmas Carol, along with Clement Clarke Moore’s  poem, The Night Before Christmas, is  touted as being the first publication to promote modern Christmas ideologies.  In fact, prior to such efforts, Christmas is often believed to have been on the down-swing.  Scrooge could be seen as a metaphor for lost Christmas spirit in all Victorians.

A Victorian Home (Ballintruan, Home of Charles Stuart, Port Hope) decorated for the holidays with a Christmas tree; a tradition of German descent that came to England with the marriage of Queen Victoria & Albert in the 1840s. PHA 2004.23.3.1675

The origin of the first Christmas card was the subject of much debate, until it was finally decided that the feat belonged to John Calcott Horsley, an artist commissioned by Sir Henry Cole to create a mail-able holiday card, in London, England (1843).

According to George Buday in The History of the Christmas Card (1954), this first Christmas card (below):

“was printed from a lithograph stone on a single stiff cardboard of 5 1/8 by 3 1/4 inches.  The ink was probably dark sepia, now mellowed a little, so that the general impression is not unlike an etching… The main panel shows a homely family party in progress, including three generations, in true Victorian fashion.” (p. 10) 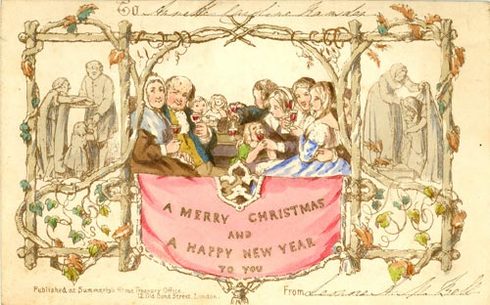 One of the around 1000 copies of the original Christmas card published at Summerly’s Home Treasury Office, 1843. (www.postalheritage.org.uk)

WORLD WAR II AND BEYOND

During both World Wars, “people often had to spend Christmas in circumstances which were in sharp contrast to all that was associated with this season in their memories of the past.” (Buday, George. The History of the Christmas Card. Spring Books, 1954).

The fact that people had to cling to some form of normality, especially during the holiday season, kept the Christmas card business up and running even beyond the war years. 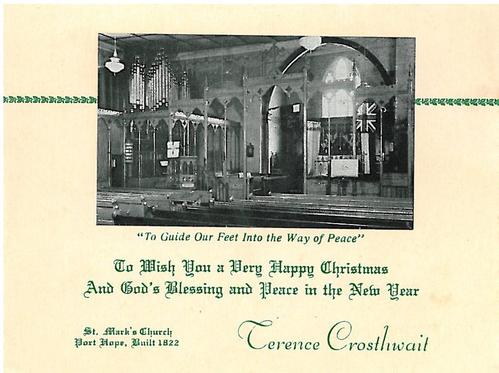 However, whichever direction Christmas cards are going, they still possess an important message, one which Ebenezer Scrooge learned at the end of Charles Dickens’ A Christmas Carol (1843):

“ever afterwards… it was always said of him, that he knew how to keep Christmas well, if any man alive possessed the knowledge.”